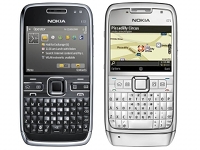 I’ve been a bit worried about Nokia’s direction lately or lack there of. I’m hopeful that their eventual Microsoft Windows Phone 7 alliance will bear fruit. For the time being Symbian still reigns now in the guise of ‘Anna’ and the Nokia name continues to carry clout, which is why I think that their announcement of the new E6 business smartphone is significant. The new E6 features both a qwerty keyboard and a 2.46 inch touch screen. What makes the touchscreen so unique and impressive is that its 640 x 480 VGA resolution has a pixel density of 325 ppi thats the same as the iPhone 4.

The E6 features an ARM-based 680MHz processor with 8GB of internal storage, an 8-megapixel camera and a microSD slot, which will go all the way up to 32GB. It features Wi-Fi 802.11n, HD video recording, GPS and a long life battery. Windows messaging is also included. The E6 is expected to arrive later this summer and overall I think it will certainly peak the interest of business users out there looking for something small, convenient and feature driven. It’s long battery life is a major selling point in itself it features over 14 hours of talk time, which is much higher than most smartphones. In terms of general usability the mixture of a high res touch screen with qwerty keyboard means you can type emails with pixel sharp text. The expected price is €345.

Watch the promo video below from Nokia.