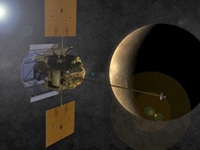 Launched in August of 2004 NASA’s MESSENGER probe, now in orbit of our solar system’s smallest and inner most planet Mercury, has begun sending back the first ever up-close photos of this dramatic tiny world. MESSENGER’S mission is to study the chemical composition, geology and the magnetic field of the planet Mercury. The spacecraft’s name is an abbreviation for MErcury Surface, Space ENvironment, GEochemistry and Ranging orbiter. The image below is of a heavily crater strewn region of the south pole taken on Tuesday. 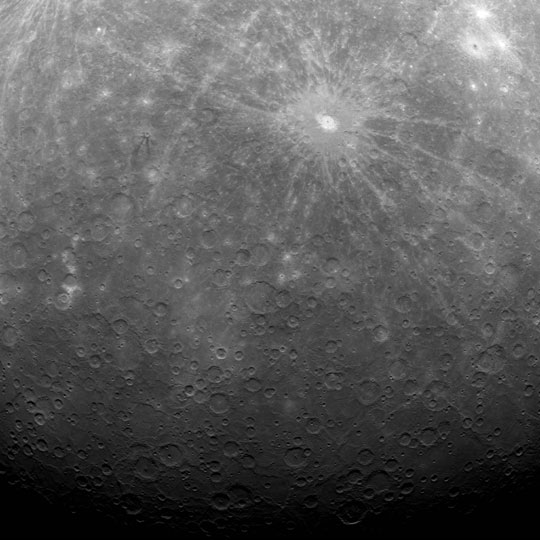 The actual primary science objectives will not begin until April 4th and will conclude approximately 1 year later by which time a total of 75,000 images will have been taken. MESSENGER is powered by a two-panel solar array, which will provide roughly 450 watts of electrical energy. The probe’s primary computer is an IEM, which is the Integrated Electronic Module with core avionics and it’s two IBM RAD6000 CPUs both designed to withstand radiation. The main CPU has a clock speed of 25 MHz and the fault protection CPU clocks in at 10MHz. Data will be recorded on two solid-state recorders with storage of 1GB per recorder, which is compressed before being sent to Earth. So Far MESSENGER has already provided us with evidence that Mercury has experienced volcanic activity and the existence of a liquid inner core.