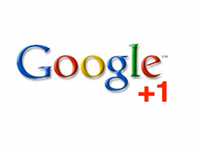 We’ve all known for some time that Google is becoming more and more concerned about the competition its search engine faces from social networking sites, specifically Facebook. The power of recommendations and questions being answered by trusted friends, family and colleagues represents a serious challenge. In response Google have begun implementing a new feature to it’s search results pages called “+1”, pronounced “plus one”. Similarly to the “like” feature of some websites like YouTube, which allows users to show that they agree with a comment, “+1” allows your friends and family to “+1” a page or search result that they like so as to get your attention, allowing you to find information that is more relevant to your enquiry. Google describes it as a way for people you know to leave helpful tips for things you care about.

This interaction is done through Google accounts and will be rolled out gradually through their experimental search site where you can opt to test out such new features. At present Google is still trying to find its feet in the social networking arena. The companies previous efforts with Buzz and Wave were met with failure. My concern for this new system would be that it could be abused by people looking to repeatedly “vote up” their own websites with “+1” via multiple Google accounts. It remains to be seen if Google will introduce controls to prevent this.