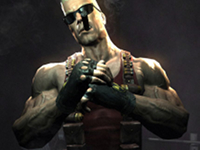 Broken promises and unicorn idioms have mired production of the longest, most eagerly awaited FPS games of all time. In 14 years Duke Nukem: Forever has become the Sasquatch of the gaming world. Having swapped hands to multiple developers and switched engines more times than Valentino Rossi, gamers finally believed that Gearbox Software could deliver the seemingly undeliverable. Having promised us a release of the game in May of 2011, production has hit an unexplained delay once again and our hopes must once again be dashed as a cynical skepticism slowly creeps in.

Gearbox made the announcement through a rather humorous self deprecating video on the Web, which clearly demonstrated their own frustrations with the delay. The release has apparently been pushed back from May 3rd till June 10th internationally and June 14th in the US.  Its all too easy to roll ones eyes and see this delay as just another among countless others in the games long and disastrous production history but perhaps this time we can cut Gearbox some slack. It is evident the delay is due to some final finishing tweaks and touches being applied, which could hardly ever have been said for 3D Realms directionless efforts in 1997. From the promotional material we’ve seen already and knowing Gearbox’s own exceptionally high standards, I would speculate that the delay is very necessary and for the time being will be worth keeping the faith for. This is one Duke Nukem game that may not take Forever after all.