Are you running Windows on your Mac? 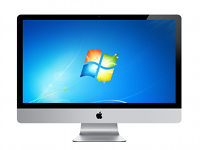 Oh how I miss the old Hodgman / Long double act. Those “Get a Mac” commercials from 2006 to 2010 had a smug charm, simplicity and effectiveness that played to both sides of the Mac / PC divide while spawning innumerable copycat internet spoofs. Love them or hate them, they worked and came just on the cusp of Microsoft’s launch of the debacle Vista and Apple’s ground breaking feature heavy Leopard operating systems. The mainstream Mac migration began in ernest around this time, with even yours truly finally biting the bullet and making the big switch from Dell to iMac. These commercials highlighted long standing and worsening flaws within Windows and further served to underline the sentiment that in this life, you get what you pay for. Its unlikely Apples new “The iPad is…” commercials will enjoy the same cult success the “Get a Mac” ads still claim.

After 4 years of bickering and back biting between the two characters it was time for change. The format simply became old and considering initial releases of Snow Leopard lacked the same level of stability enjoyed by its older feline sibling coupled with Windows 7’s marked improvement over Vista, the series was quietly shelved mid last year. Regrettably Apple’s marketing machine is yet to churn out any new Mac related successor, instead focus has steadily been shifting more and more to their mobile products. The potential negative impacts and discussion of spreading the Cupertino based organization too thin is fodder for another article.

Nevertheless the Mac / PC debate still rages on albeit in less of a schoolyard fashion these days. It’s become almost a semi religious crusade of some. Sad in my view but good competitive geeky fun to others. However there are those few of us who decided long ago that such childish arguments were rather redundant. Opting instead to see the productive side of both Operating Systems. I for one outlined this clearly in my Youtube Video entitled “Mac VS. PC: Windows 7 VS. Snow Leopard” found here:

An unbiased and logical approach is always best but rarely found with respect to this debate. It’s important to remind ourselves that at the end of the day, software and hardware are merely tools to get work done. Although the industry giants do enjoy rallying their followers around them and pitting their users aka “fans” against each other. All we can do is try and rise above the pettiness. Those Windows fanboys who claim they’d never so much as touch a Mac truly don’t know what their missing, although perhaps they do on some level but pride prevents a closer look. Same goes for the Mac fanatics who would rather run DOS than Windows on their shiny fruit bearing masterpieces. On a side note, it often puzzles me how so many Mac critics can slate the Apple ecosystem and describe it as “locked down” when the Mac can run Windows but a PC cannot run OS X. At least not without great difficulty.

So Todays question is Do you run Windows on your Mac?

I’m most interested to know why your running it also. Perhaps for business applications or gaming purposes. Via bootcamp or virtualization with Parallels or Fusion? Maybe its even just to feel you have the best of both worlds in one box. I’m using a 40GB Windows XP partition on my Macbook Pro as theres some graphics software and legacy applications I still need for business. On my iMac I’m running a 70GB partition of Windows 7 Enterprise for gaming. I’m sure I’m not alone in saying that although Windows is installed on my Mac its rarely used. Still, I prefer the idea that I’m covered no matter what the eventuality. If someone hands me a disc that can only be read in Windows I’m glad I’m not limited to saying “Good luck with that, I’m running OS X, ever heard of it?” or “That won’t work in my computer”. Its nice to have a machine for every occasion.

Check out my related video: Do you run Windows on your Mac?

How to installing Windows on your Mac:

11 thoughts on “Are you running Windows on your Mac?”