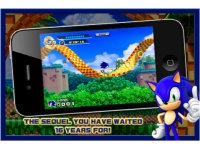 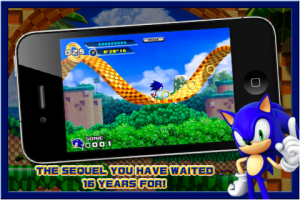 First up is Sonic the Hedgehog 4. The long awaited sequel slash quasi reboot to the original side scrolling trilogy. Yes the games been out since october of 2010 and I’m finally getting a chance to review it now.

Sonic 4 Episode one is a semi re-imagining of the original sonic games, specifically the first two games mashed together with superior modern graphics and a few new gameplay twists along the way.  Returning to its 2.5D side scrolling platformer roots, last seen in Sonic 3 & Knuckles, The style of play remains consistent and is true to the Genesis classic. Sonic’s running, jumping, speed, spin dash moves, cork screw turns, loop the loops and power ups are all present. He even sports a fun new homing attack allowing you to target and lock onto a bad guys or power ups with precision accuracy. Bad guys and level design feel authentic to the original sonic team series and unlike other sonic ports for ios devices this one actually makes far better use of the input controls, although they’ll never be on par with physical joypad controls.

That said the game lacks the magic of the original series. For one thing, the fact t

hat the game isn’t a true sequel has alienated many longtime fans. Rebooting the series was probably the wrong idea. As a result the game feels a tad lazy on the developers part as the sense of nostalgia they were hoping for is replaced by a feeling of ‘same old same old’. As a retro gamer and ardent fan of the first 3 games I know that the physics in this game are not quite what they should be. Sonic is trickier to precisely control for tight jumps and moves. Whats more the lack of other characters has removed a fun and dynamic element from the game. Fans didn’t want too many characters to play with, asking sonic team to only retain Sonic, tails and knuckles. But sonic team instead felt the need to simplify it to its bare ingredients with just the spiky blue haired one himself. Which begs the question; Why is this game called Sonic 4? The description of the game even says this is where Sonic & Knuckles left off but Knuckles is no where to be found and the game visually and thematically is based on sonic 1 and 2.

more levels. While the game does have some fun elements here and there, nothing new is added to the franchise and its unlikely a new legion of fans will develop as a result. Its over reliance of familiarity with the classic series and homages with old levels along with relatively low difficulty settings won’t challenge hardcore platformer fans either. Re-playability factors are small and finally a last nail in the coffin would have to be its price. At a whopping €5.49, work that out in your own currency. It’s massively overpriced. Considering there are much more fun addictive free and cheap games in the Apps Store.

Overall, Sonic 4 is in my opinion not worth the investment both in terms of cash and game play time. Final Score 5/10. 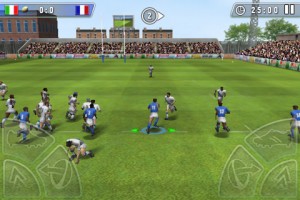 Up next is something completely different. Many of you may know i’m a serious Rugby fan and the only real oval ball based games on the iPhone at the moment are from distinctive developments who brought us Rugby nations 09. The game was a moderate offering with low difficulty settings and simplistic game play. Now Rugby Nations 2010, also released late last year, brings us a more meatier title. With improved performance, graphics and new game elements its far closer to the real thing. Unlike the first game the player doesn’t automatically kick the ball out at the end of a half. Scrums have now been introduced. They’ve also added the ability to contest the ball at the ruck breakdown using a swipe. They’ve improved the conversion kicking and added wind as a variable. The instant replays don’t really add much to the game because the player movements are still too jerky to watch. They’ve added knock forwards and most importantly introduced difficulty settings. Unfortunately the game is still too easy, and lacks a few critical elements like the ability to contest the lineout, which is still controlled by the computer and dodging moves are still absent, which would have been nice.

Still they deserve credit for being able to combine all of the complicated aspects of rugby into a tight control system that works surprisingly well. all major tournaments are present, like the 6 nations, tri nations and world cup. You can also test your conversion kicking skills in a new game mode and with the addition of game center you can challenge your high scores and achievements against other players. My only gripe is that there’s still only 12 teams, which makes the world cup too short. The game is lacking Georgia, Namibia, Romania, Canada, Fiji, Russia, Tonga and Samoa. This would bring the world cup to the full 20 nations and make it more of a complete competition. Hopefully a simple update can address this. Having the Church hill cup as a playable tournament would be cool too. Perhaps additional teams like England Saxons, Ireland Wolfhounds and New Zealand Maori could be added. Well done to the developer for listening to the feedback. It’s not perfect but it’s very close and certainly a worth while purchase.

Again this isn’t cheap but its just about the right price at €3.99. If i’m being honest it’ll probably be lost on many people as It’s a niche enthusiast game anyway. So in that respect its a little bit the like the real thing I suppose. Final Score for Rugby Nations 2010. 7/10. 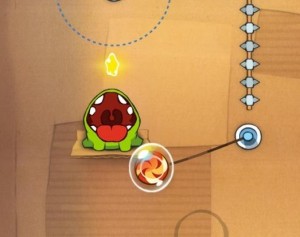 An example of a really cheap and fun game that will probably take over your life in a manner similar to angry birds and plants vs zombies is Cut the Rope.

It’s just €.79 and be warned, extremely addictive. The concept is simple. You have to guide a piece of candy on a rope into the mouth of a hungry green creature called om nom. You guide the candy on its trajectory via the rope making sure not to bump into spikes, spiders and other obstacles, and make the cut in the rope at the right time with a simple swipe. A level is passed when the candy neatly drops into the creatures mouth, plus you’ll be trying to grab as many golden stars as possible for extras points and make use of the unique physics engine to swing the candy from rope to rope and even into soap bubbles as you continue on your quest to feed your frog like friend.

Graphics are simplistic and colorful, the cheesy soundtrack only gets annoying when your stuck on a tricky level but I won’t say much more about the game. The addictive and fun gameplay speaks for itself. It’s cheap and a great time killer. Get downloading. Cut the Rope 8/10. 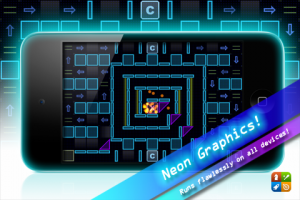 And finally a game I was given to review from Vladimir Vernacki of triple lite games is Vparticle Plus. Described as a labyrinth physics based puzzle game. You control some particles and attempt to guide them from one side of the screen to another using only the accelerometer. Along the way you have to attempt to avoid numerous obstacles like moving blocks, acid, vents and slow elements. The game features 5 game types and over 200 unique levels. It also boasts identical performance of 60 frames per second and full compatibility across all generations of iphones and ipods.

Game play is amazingly simple, in fact theres nothing much too it. It feels like one of those old marble maze games, in fact its in a similar vein to marble maze ultra, which is much cheaper at just €.79 cent and its a lot more fun. Vparticle plus costs €2.39 which is extremely over priced. For that you get a game that feels stuck in first gear. Some of the most popular and successful puzzle based games on any ios devices are the ones that make good use of the best feature of those devices. The Multi touch capacitive display. With only the accelerometer for input the game gets old fast. It could have benefited from a countdown clock as some kind of incentive to complete the levels quickly. Although the only difficulty you may find is when particles get separated and trapped in one location, this doesn’t add any new element to the game. Particularly when particles get squashed by blocks and destroyed they just reappear again at the start point, making your efforts feel pointless anyway. The game may still appeal to physics enthusiasts and fans of labyrinth maze games but the general populous will be scratching their heads regretting spending €2.39 on this. The fact is there are plenty of free and cheap games in the apps store that are far more fun. Just look at the game Jon Q from techno buffalo reviewed a few days ago. Tiki Totems. simple concept, Free and exceptionally good fun and like cut the rope, extremely difficult to put down.

Final score for Vparticle plus 4/10.